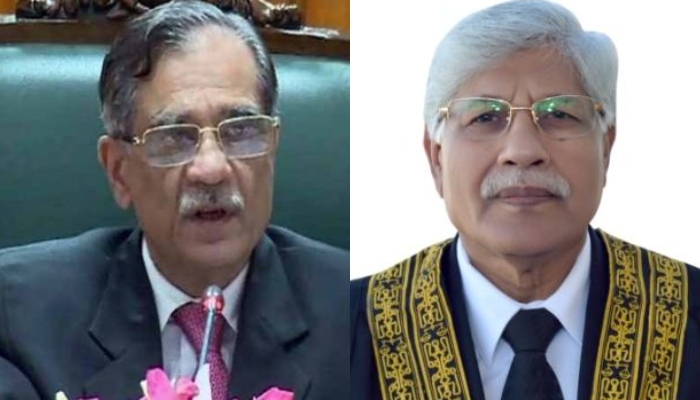 The court was hearing a contempt of court case against Shamim, Editor-in-Chief Jang Group Mir Shakeel-ur-Rehman, Editor The News Amir Ghori and senior journalist Ansar Abbasi over a report that claimed Nisar denied bails to PML-supremo Nawaz Sharif and Maryam Nawaz before the 2018 elections.

The court remarked during the hearing today that the former G-B judge tried to shake the public’s trust and confidence in the judiciary.

The IHC Chief Justice Athar Minallah directed Shamim to record a reply on his affidavit within five days.
Earlier today, Justice Minallah summoned the former chief justice G-B to the rostrum and asked if he had submitted a written response in the court.

“My lawyer will tell you why I did not submit a written response,” Shamim replied.

Justice Minallah also noted the newspaper had published details of Shamim’s affidavit about an incident that allegedly occurred three years ago.

Shamim told the court, “I was contacted after my affidavit was published. I confirmed it.”

“The affidavit was sealed, I do not know how it got leaked.”

“Did you provide the affidavit to that reporter,” Justice Minallah asked Shamim.

“No, I did not submit the affidavit for publication,” the former chief justice G-B replied.
Justice Minallah asked Shamim, why did you submit that affidavit in London?

“You have to tell the court why you submitted an affidavit after three years,” said the CJ IHC and added, “The court is granting you five days to submit your written response in this case.”

Shamim later requested the court to hold the next hearing after December 12 as his brother’s and sister-in-law’s chehlums were on December 5 and 12, respectively.

“Please hold the hearing after that,” Shamim pleaded the IHC.

Attorney General of Pakistan (AGP) Khalid Jawed Khan, who was also present in today’s hearing, requested the IHC to direct Shamim to present the “original” affidavit in the IHC with his written response.

“Let me check, I do not know which affidavit was reported in the media,” replied Shamim.

The AGP also argued and asked that if a person who had submitted the affidavit didn’t know about content, then who helped to prepare the affidavit?

“The affidavit was submitted on November 10 and now Rana Shamim is saying he does not know what is written in it,” he added.

Justice Minallah directed Shamim to submit his written response along with the original affidavit on the next hearing. He also told the former G-B judge to submit a written response to the show-cause notice sent to him by the high court.

Justice Minallah remarked that judges should face criticism and added, “Please do not drag this high court for the sake of political narratives.”

The IHC later court adjourned the hearing till December 7.