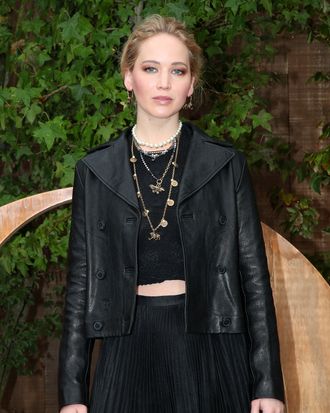 Jennifer Lawrence covered a lot of topics in her new Vanity Fair interview — her pregnancy, her new movie Don’t Look Up, her two-year Hollywood hiatus (“”everybody had gotten sick of me”). But I want to talk about something important: Lawrence’s revelation that her favorite movie is Hereditary.

Yes, Hereditary, the Ari Aster horror movie that gave audiences nightmares and made Toni Collette’s screaming face a meme, is Lawrence’s favorite film. She loves it so much, she has a water bottle decorated with Hereditary stickers. And for her 30th birthday, her husband Cooke Maroney hid a diamond necklace in a hardcover copy of the Hereditary screenplay. “It was so sweet,” she told the magazine. Because — spoiler alert — who doesn’t want to be reminded of a brutal beheading on a milestone birthday?

Thinking back on Lawrence’s career, this choice — while still very disturbing to anyone (read: me) who flinches at the mention of horror — actually makes sense. I mean, this is the actor who became famous for playing a teenager-turned-mass-murderer in the Hunger Games trilogy and who starred in Mother! It seems right that she would have a dark side. And if it ever gets to be too much, she can always fall back on her other favorite source of entertainment: Keeping Up With The Kardashians and Real Housewives.