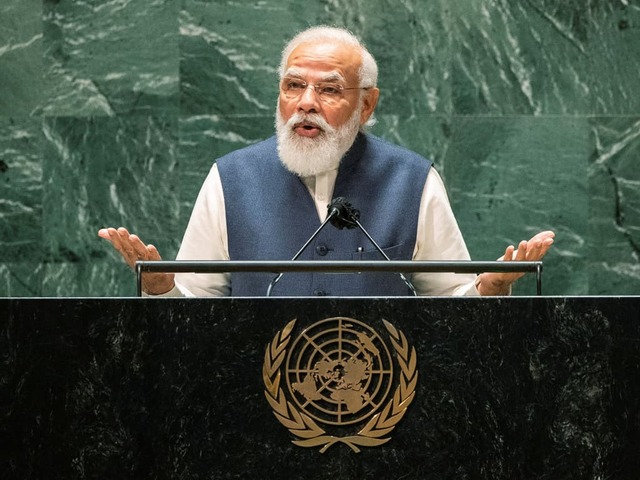 UNITED NATIONS, (United States): Indian Prime Minister Narendra Modi told the United Nations Saturday that no country should exploit the turmoil in Afghanistan for its own advantage after Prime Minister Imran Khan appealed for nations to work with the Taliban.

Modi’s address came after India tried to upbraid Islamabad both in Washington and at the UN General Assembly where the rivals clashed over Khan’s speech late Friday that pointed out that the Indian government is conducting a “reign of terror” on Muslims.

“It is absolutely essential to ensure that Afghanistan’s territory is not used to spread terrorism and for terrorist attacks,” said Modi. “We also need to be alert and ensure that no country tries to take advantage of the delicate situation there and use it as a tool for its own selfish interests.”

On Friday, the Indian PM raised concerns about Pakistan during talks with US President Joe Biden as well as at a broader four-way summit with the leaders of Australia and Japan, according to Indian officials, who said the others concurred.

Khan told the General Assembly that the Taliban have promised to respect human rights and build an inclusive government since taking over last month, despite global disappointment in a caretaker cabinet.

“If the world community incentivizes them, and encourages them to walk this talk, it will be a win-win situation for everyone,” he said. “We must strengthen and stabilize the current government, for the sake of the people of Afghanistan.”

Khan, a longstanding critic of the 20-year US war ended by Biden, blamed imprecise US drone strikes for the flareup of extremism inside Pakistan and pointed to Islamabad’s cooperation with US forces.

“There is a lot of worry in the US about taking care of the interpreters and everyone who helped the US. What about us?” Khan said in a speech, pre-recorded by video due to Covid-19 precautions.

“At least there should have been a word of appreciation. But rather than appreciation, imagine how we feel when we are blamed for the turn of events in Afghanistan.”

Biden has yet to speak with Khan, much less invite him to hold talks, although Secretary of State Antony Blinken met Thursday on the UN sidelines with his Pakistani counterpart and offered thanks for help repatriating US citizens from Afghanistan. Khan accused a world eager for India’s billion-plus market of giving “complete impunity” to Modi.

“The hate-filled Hindutva ideology, propagated by the fascist RSS-BJP regime, has unleashed a reign of fear and violence against India’s 200 million-strong Muslim community,” Khan said.

Under Modi, India has illegally rescinded the statehood of Kashmir, its only Muslim-majority region, pushed through a citizenship law that critics point out discriminatory and witnessed repeated flare-ups of religious violence.