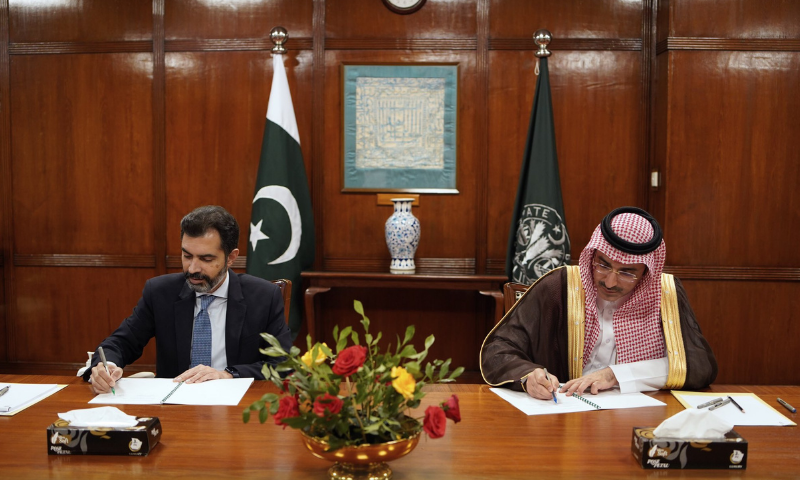 KARACHI: The State Bank of Pakistan on Monday signed an agreement with the Saudi Fund for Development (SFD) to receive $3 billion, which will be placed in the SBP’s account with an aim to improve its foreign exchange reserves.

The agreement was signed by SFD Chief Executive Officer Sultan Bin Abdul Rahman Al-Marshad and SBP Governor Dr Reza Baqir at the State Bank in Karachi, according to a statement issued by the SBP.

In the last week of October, Saudi Arabia had agreed to revive its financial support to Pakistan, including about $3 billion in safe deposits and $1.2bn worth of oil supplies on deferred payments.

An agreement was reached during the visit of Prime Minister Imran Khan to the kingdom last month.

Information Minister Fawad Chaudhry later announced that Saudi Arabia had announced the support for Pakistan with $3bn as deposit in the SBP and also financing refined petroleum product with $1.2bn during the year.

“Under this deposit agreement, SFD shall place a deposit of USD 3 billion with SBP. The deposit amount under the agreement shall become part of SBP’s Foreign Exchange Reserves,” said the press release issued on Monday.

However, it did not speak about the interest on $3bn while the banking sources believe the interest rate is higher than the global market.

When the SBP was officially contacted to know the agreed rate of return on Saudi fund as there were massive speculations in financial market about the rates being given on $3bn, it stated: “As per agreement all terms are confidential and cannot be revealed without the consent of both the parties.”

The press release further stated it would help support Pakistan’s foreign currency reserves and contribute towards resolving the adverse effects of the Covid-19 pandemic.

The SBP said the deposit agreement reflected the strong and special relationship between the Kingdom of Saudi Arabia and Pakistan and will further augment the economic ties between the two brotherly countries.

However, the agreement for $3bn did not impact the exchange rate and the local currency further lost against US dollar to reach at an all-time low.

The US dollar kept its demand higher during the entire session on Monday and closed at Rs176.20 as it gained 74 paisa.

Experts in the financial market said the imports would not fall in coming months indicating that importers would keep buying dollars for protecting future trading with possible higher dollar rates.

The inflow of remittances and foreign direct investment declined in FY22; remittance fell by $152m in October compared to inflows in September FY22 and the FDI fell by 12 per cent during July-October period of the current financial year.

During the meeting, matters relating to the dividends paid by the public sector enterprises also came under discussion.